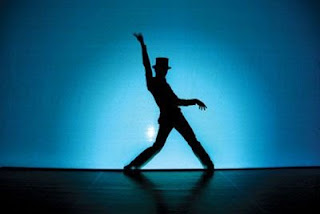 born in 1981, is a graduate of ballet school in Warsaw and was a student of Brucknerkonservatorium Linz (Austria). During his studies he became a founding member of the company x.IDA (Austria) dancing and touring internationally (Austria, Germany, Poland, Canada). Since 2002 Janusz is a member of Vincent Dance Theatre (Sheffield, UK)

In 2001 Orlik won the 1st price at “Das Podium” competition for choreography (Linz, Austria) for “Monodrama” which was also presented at the “Young Choreographers Debuts” in Gdansk, Poland. In 2006, a student of “School of Ballet and Dance Fouette” (Poznan, Poland) won the 2nd price at “Jugend Tanzt” (Dortmund, Germany) dancing in Janusz’s choreography “Not perfect”.

As well as performing Janusz delivers dance workshops in different venues and dance schools in Poland and abroad. Janusz’s choreographic work focuses on asking questions about the meaning, delivery, honesty and truthfulness of movement. 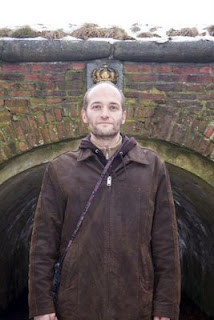 BBB Johannes Deimling born 1969 in the german town Andernach on the Rhine River, has worked since 1988 as an artist in the fields of performance art, video, object, installation, drawing and music. Especially with his performative works, the artist became internationally renowned. In numerous performance art festivals, in exhibitions and in the public he presented his ephemeral works in Germany, Poland, Switzerland, Estonia, Austria, Romania, France, Italy, Spain, England, Czech Republic, The Netherlands, Israel, Canada and Cuba.

Under the term 'agierte Bilder' - acted, or living images, used since 1995 the artist creates living images, which he puts into a pictorial aspect. Based on an idea or a concept a performance will be developed, with which he in an incisive moment the ontic tangible reality solidifies. In the moment of the presentation, constitutes an image that focuses everyday life or social conflict situations. Thereby accrues an acted image, which points beyond the bare experience of sense, because with each action Deimling alienates something from us that is well known. He uses well-known objects in a changed way, twists courses of action right around or remains in a pose, which appear at first sight strange, on the second all the more comes out with a deeper meaning. Here the creative act is the centre of attention. In the ultimately accruing image the precisely planned consistency of the first singular appearing gestures shows up.
He conceptualize an image of our society, which shows it full of contradictions, sentimentally, stupidly and badly, but also affectionately, creatively and cooperatively. He observes the world from his characterized point of view. A temporary image remains in the memory of the viewer. Particularly these images of BBB Johannes Deimling, show a nearly sliding transition between usual ordinariness and art.

Deimling finds his ideas and suggestions in the banality of the all day life and combines these researches with its own biography. The artist transforms topics such as patience, will, war, religion and transportation into physical images. The head is often a focus and again in the performances whether as living sculpture covered with plasters (band aids) or as material struck against the wall. At the creation of its acted images he works often with simple, poor materials.

Performance Art is for BBB Johannes Deimling of artistic and social value, which orients itself more on all day life than the meaning of art at the museum, a radical and honest form of the visual arts, which the creation of a work of art, its presentation, reception and reflection unites in one moment. The centre is the creative act. Not the commercial use of the work is crucial, but the volatility inspired by the impression of the viewer. The absence of a manifested artwork is not a fault, but a quality characteristic. An ephemeral moment happens and unites different personal levels, which the artist offers to his public. Deimling speaks with his body and with its movements and creates a platform of communication. This stands on four columns: The body of the artist, the time, the space and the communication with the viewer. In the moment the creative act merges the four elements into a unique readable sign of general importance, the heart of the artistic act. 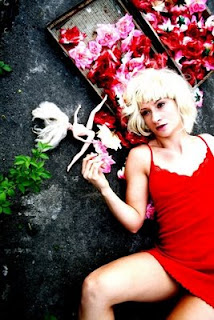 Barbara Bujakowska - graduated at the Institute for Dance Art - Anton Bruckner Privatuniversität-Linz (Austria). She started her dance career in 1994 as a pupil of Ballet Studio associated with Cracow Opera. In 2003 she finished Preparatory First Program in Salzburg Experimental Academy of Dance.
In 2008 she has received the First Prize in Polish TV contest "Dolina Kreatywna" for her solo presentation "Swan...like". In the same year she became a resident of Solo Project in Poznań, were she produced with Marcin Janus show titled „Movement Modular Synthesis”. Since November 2008 she’s been dancing in "My", a performance made by Maat Project. She lives in Kraków, where she is leading dancing and movement workshops and where she is performing her own projects.
Autor: Adam o 15:08 Brak komentarzy:

“Angelika Fojtuch’s performance work deals with the issues of communication, the role of body and emotions in interpersonal relations and the creation of identity confronting them with the mechanisms of culture. Focusing on gender questions and norms of individual’s appearance in public space, she explores and crosses the borders of social conduct in order to reveal collective latent tensions, neglected fantasies or traumatic fears. Her work is usually conceived as a process of interaction with an audience, that Fojtuch often puts in uncomfortable or embarrassing situations. She often refers also to the specific social and psychological context of the performance’s site.” 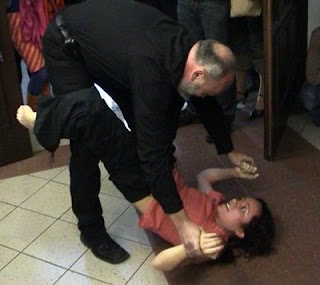 Angelika Fojtuch -
Born in 1978, in Gdynia, Poland.
She studied at diverse Polish Academies of Fine Art: in Torun, Krakow, Poznan and Gdansk.
In 2005 she graduated from the Department of Sculpture and Intermedia at the Academy of Fine Art in Gdansk.
She works primarily in performance art and its documentation (video, photography, text) and she has given performance workshops a.o. in Bezalel Academy of Fine Arts and Design in Jerusalem, Theather College in Jaffa, IDK The Academy of Fine Arts in Tallinn.
Angelika Fojtuch's art work has been presented at events and festivals throughout Europe, in Israel, Canada, China and USA, a.o. at Liste 08 Art Fair in Basel, VIENNA FAIR, NADA Art Fair in Miami, OPEN in 798 Art Zone in Beijing, 7a11d Fado Center in Toronto. In May 2009 is invited to the 2nd Biennale of Contemporary Art at The State Museum of Contemporary Art in Thessaloniki.Her article about performance art is included in "Pedagogia de la Performance" a book published by Valentin Torrens. She is presented a.o. at “Tekstylia bis-dictionary of the polish young culture”, “Wikipedia” and “culture.pl” portal.
In 2006, she co-founded PORT PERFORMANCE - Forum for Performance Art.
PORT PERFORMANCE has conducted performance art workshops for international participants in Gdansk, Tallinn, Berlin and Tel Aviv.
Autor: Adam o 18:47 Brak komentarzy:


Harakiri Farmers - artistic collective founded by Dominika Knapik and Wojtek Klimczyk. Deliberately non-institutional initiative aimed at creating a meeting ground for artists from different art forms. HF has no leader, no seat, and no subsidy. The first project of Farmers - theatrical performance in a swimming pool entitled "Keret" based on short stories by Etgar Keret - won the first prize of "New Situations" competition during Malta Festival 2008. "Beat Hotel" is their second work. The third one will be "Dance Monkey Dance!" created with Norwegian choreographer and dancer Kenneth Flak and French composer and musician Chazam. Dominika Knapik is a dancer, actress and works as choreographer in drama theatre (ia. "versus" in Teatr Nowy, Kraków and "Fragments of a Lover's Discourse" in Teatr Dramatyczny, Warsaw, both directed by Radosław Rychcik). In 2007 she received prestigous DanceWeb Europe scholarship. Next year she danced in Gymnastics Association's "nothing". Wojtek Klimczyk is a sociologist by profession. He wrote "Postmodern Eroticism" published by Universitas. Together they created "how do you like me?", Dominika's solo dance performance, which was presented during last year's Mandala Festival.
Autor: Adam o 18:42 Brak komentarzy: 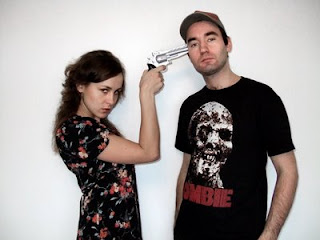